Redesign, launch, and iterations of an idea prioritization module for Product Managers.

Kicked off through an evidence-driven redesign informed by usability research, followed up by launching and iterating on a MVP through close collaboration with Engineering and Product. 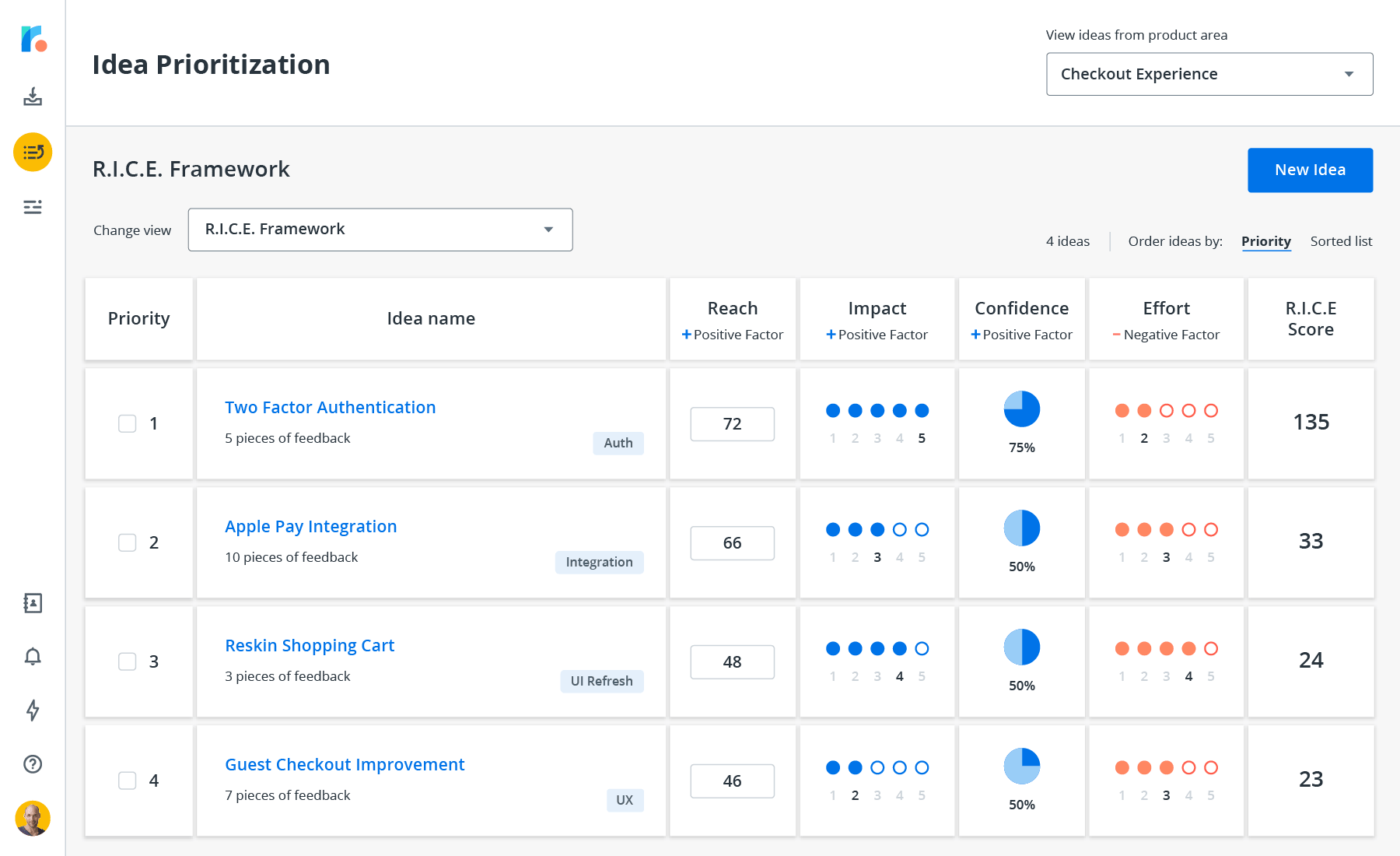 Roadmunk is a high-growth startup whose bread and butter offering is a software solution that allows customers to easily and quickly create visually stunning roadmaps.

When I joined the project the organization was faced with three major problems with the core offering for roadmapping.


The combination of these problems results in a life-time value of just 4 years for the average subscriber, and a lot of customer churn for the business. To tackle these issues, a new product line was planned to be built to capture more PMs as customers, and allow existing customers to engage more periodically with the product (as opposed to only using Roadmunk on a monthly cadence).

Customer feedback are collected, ideas are prioritized before they are promoted into features.

The new product area "Feedback and Idea Management" (or FIM for short) will be tailored specifically towards the workflow of Product Managers, that's built upon a modern techstack using React. By the time I joined the team the project had already ran for 8 months, with a fast approaching deadline.

One of the first things we did after joining the team was to conduct a series of 1-hour user research sessions. The participants composed of both existing and prospective customers. The format included semi-structured interviews as well as usability testing sessions to evaluate both product-market fit, as well as the ease of use of the prototype. Up until this point, the product prototype had not been evaluated against live users.

The prototype that was tested with existing and prospective users

Here's what we learned,

From research, we uncovered that the presented workflow on the board did not resonate with how the PMs are used to working. For example, the canvas experience behaved different from user expectations - product managers familiar with the RICE prioritization framework know that the RICE score is calculated as Reach x Impact x Confidence ÷ Effort. The way the score is calculated on the canvas doesn't follow said formula.

It is unclear to the users why certain factors are assigned the values they have, and how the shapes, and colours of the values contribute to the given scores. Why do 4 stars and 2 squares equal 67?

What we discovered from research was that investment was made towards certain features that were low desirability and usefulness that added friction to the workflow. The value proposition for FIM was to allow PMs to quickly prioritize and quantify different idea.

For example, the factors (page values) were far too customizable - users must select the colour and shape of the rating factors before using them. The default colour and shapes of many factors also didn’t accurately correlate with the data they were supposed to represent. 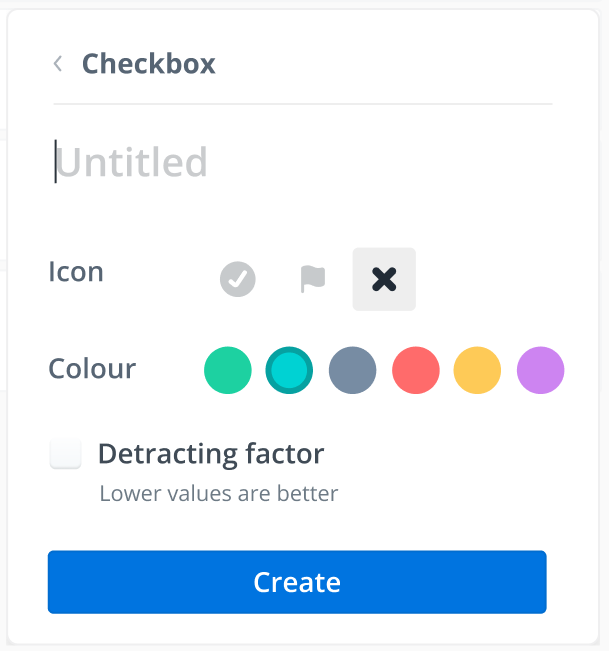 The pre-existing feature prioritization workflow required a lot of set up that were hidden and hard to find. For a user to start finding value in the idea prioritization module, they need to...add product areas, add components, add the new ideas manually, customize the board to include the factors they need for the prioritization, then assign factor values for each idea individually.
At a glance it is not clear on the page what elements are interactable, and what the different dropdowns represent. Users had trouble finding their way through the app, and what they expected the dropdowns and interactions to be often defied their expectations.

The functions of the dropdowns are unclear at a glance.

I always design from a moodboard formed from a variety of different sources - competitive analysis, conventional interaction design patterns that users would be familiar with, and other adjacent experiences that may be applicable. In other words, a mishmash of different prototypes are often "frankensteined" together when I design. 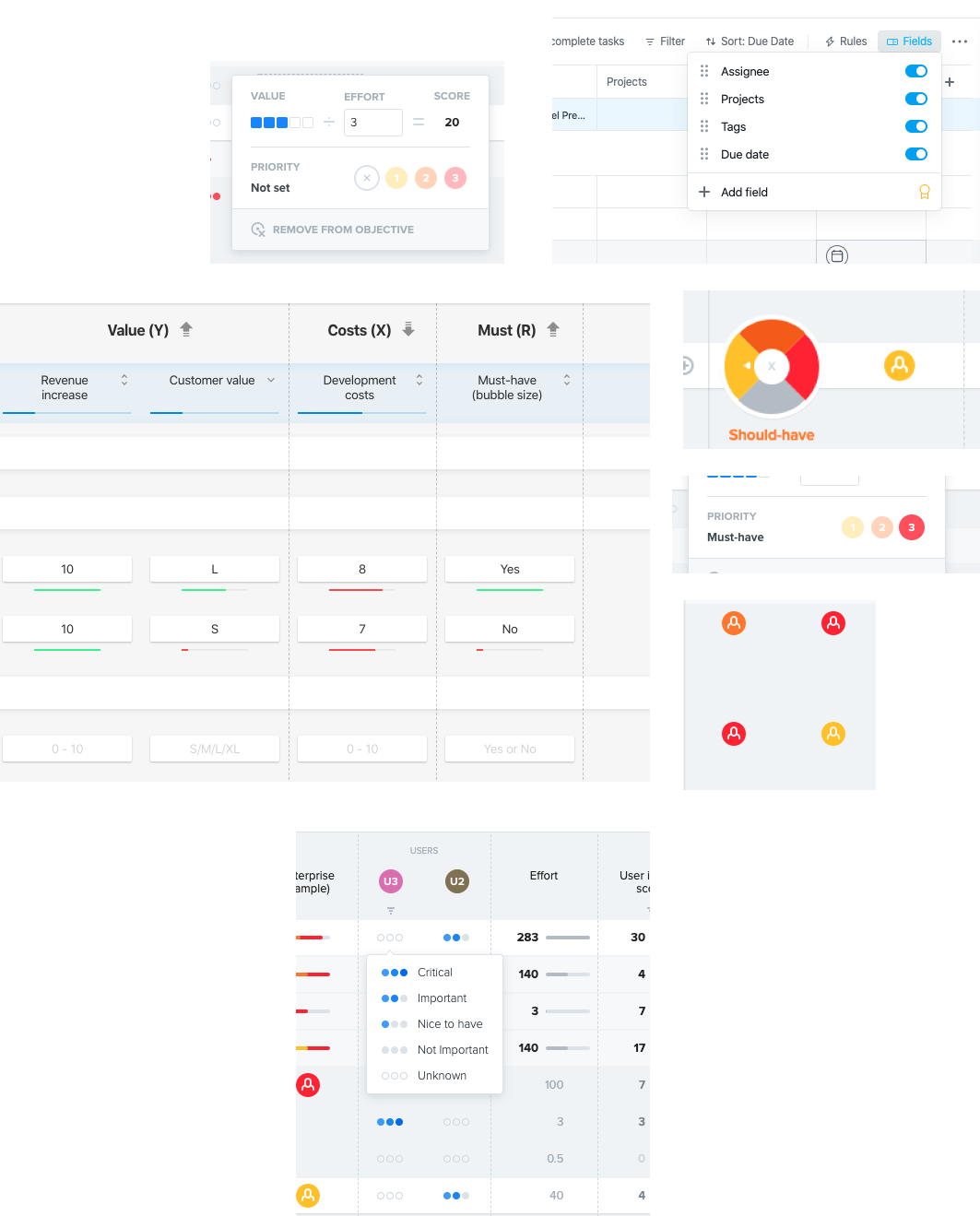 Competitive analysis of the boards and factors. 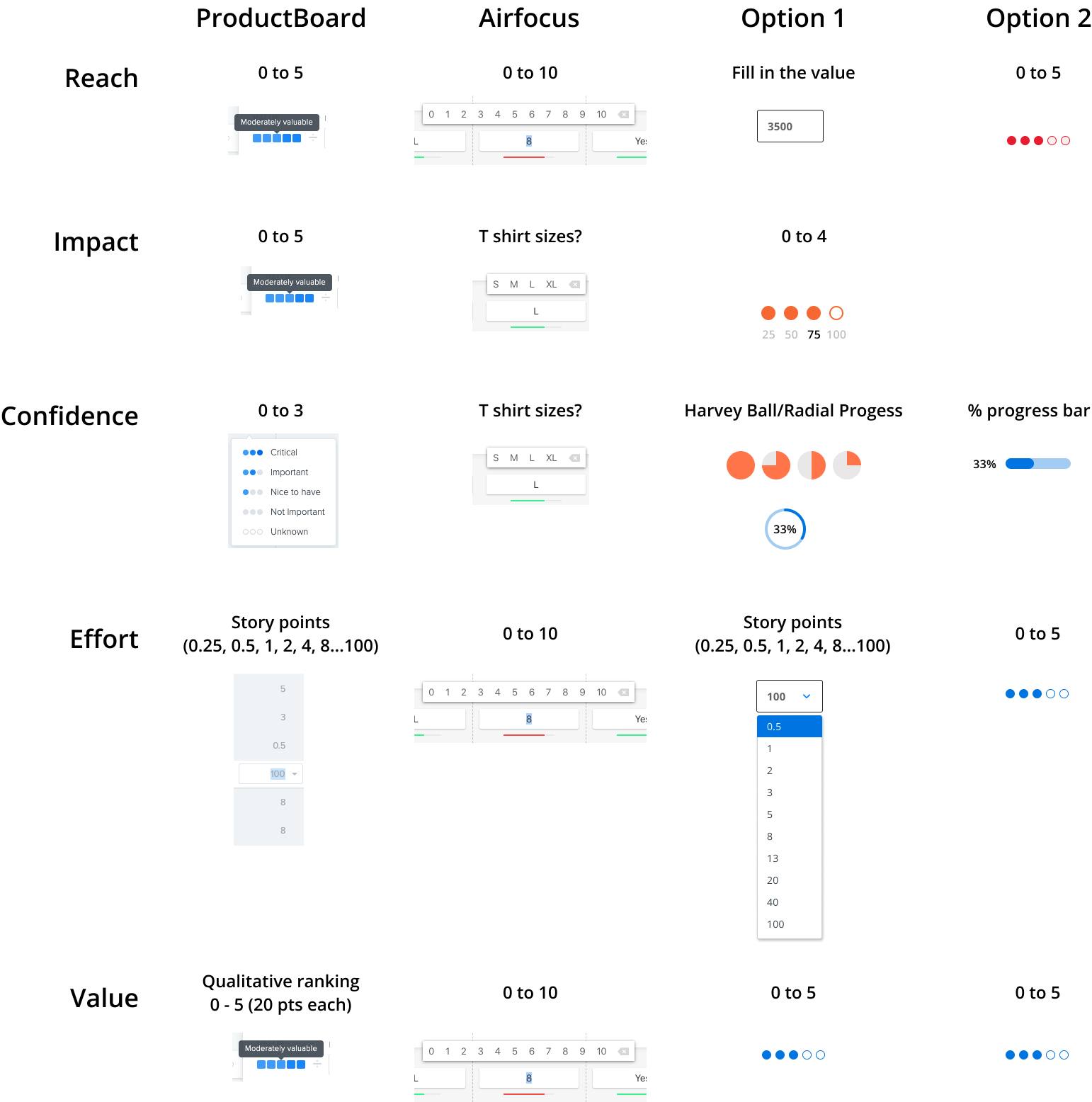 What we ultimately launched

The final iteration below went through several rounds of internal stakeholder feedback, while taking into consideration the business goals and technical constraints. User feedback was also incorporated to land on the final iteration. The total iteration from research to design to launch were completed under 3 months.

What we ultimately launch - this is what is live today.

Morale amongst the engineers was definitely a challenge when I joined the project. The project had been running on a crunch schedule for 2 months at this point, with most of the features already BUILT out. On the verge of engineering burn out, a new design team came and introduced a lot of evidence indicating problems with the existing build. The teams were also split across two separate offices, with the developers in Kitchener-Waterloo and all the designers in Toronto — the remote working conditions were less conducive to organic collaboration.

The atmosphere was visibly tense when the design team suggested changes to the existing build given all the work that has already been put in. There was initial reluctance to collaborate and communicate between the teams. I had to navigate the situation carefully and try my best to bridge the collaboration and communication gap through a couple of different strategies.

Evoke empathy for the user pains to align on purpose

I started involving influential members of the development team to join me on user calls to evoke a shared sense of the empathy. The perception within engineering up until this point felt as if design & product overlords were arbitrarily ordering the engineers around to do their bidding. These calls aligned us on the core goal of the project - which is to deliver a better experience for the end users. By involving development directly in understanding customer frustrations, it became much easier to influence development ICs on design decisions. 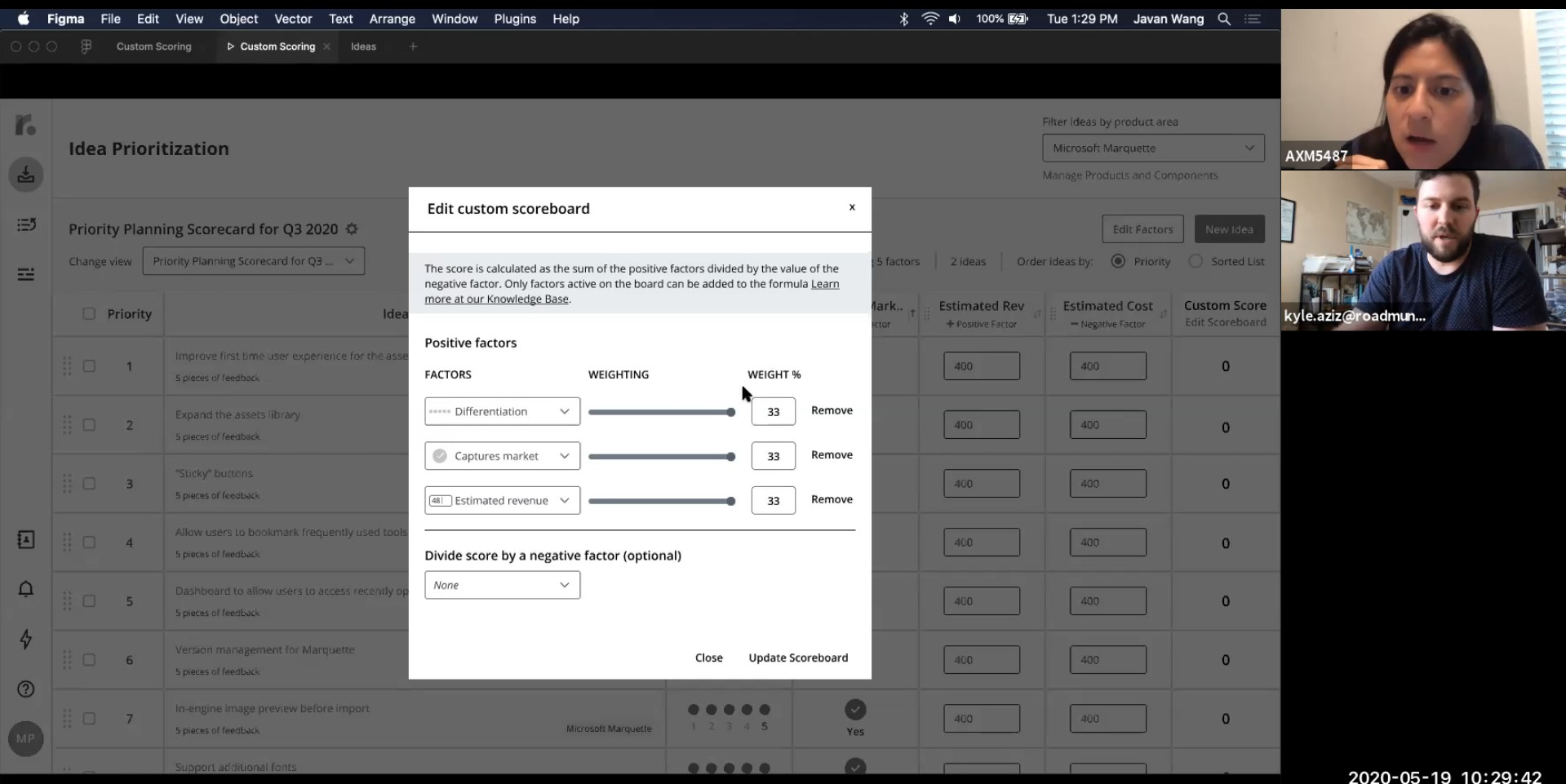 Taking prototype testing calls together with both PMs and devs

"Asset sheet" to speed up collaboration

Due to the timeline, it wasn't possible to introduce a full design system into the project. I created a master asset sheet in Figma that as a "stop-gap" DS. This asset sheet documents transitions, states, and interactions of common components to increase consistency between pages. 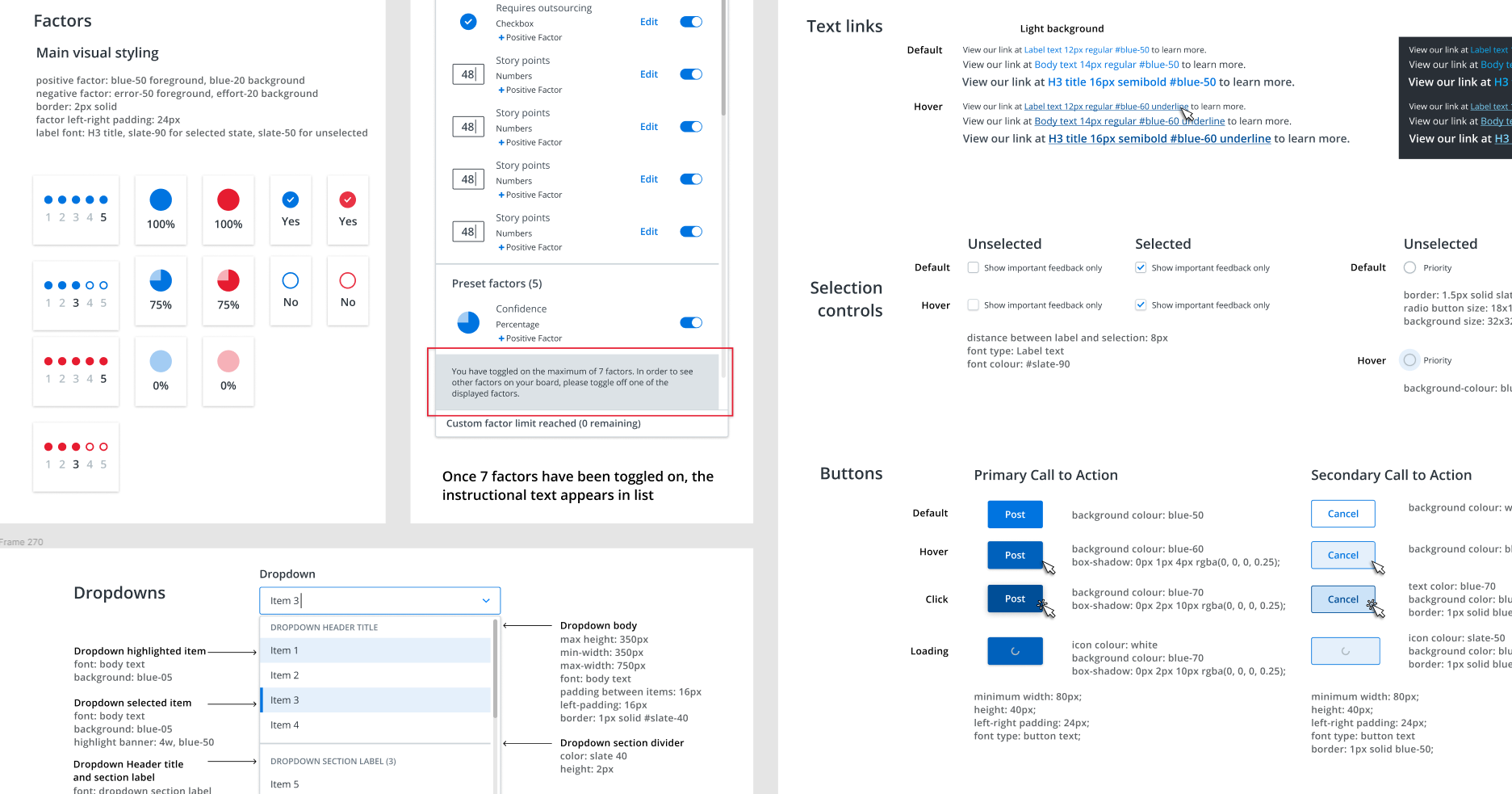 The asset sheet did a lot to bridge communication and collaboration gaps, the effort did not go unnoticed by members of the development team.

As a business we decided to constraint the amount of options people have access to at launch to create opportunities for monetization. 2 default boards and 5 factors were available at launch. We want to get a sense of how many boards were created and how many factors were made and iterate from there.

Qualitative feedback was gathered through multiple forms - surveys from Chameleon as well as user research to gather testimonials on what needed to change to increase adoption. I ran a mix of moderated (Zoom & Figma) and unmoderated (using Maze.design) usability testing sessions to evaluate desirability and usability of the new features. 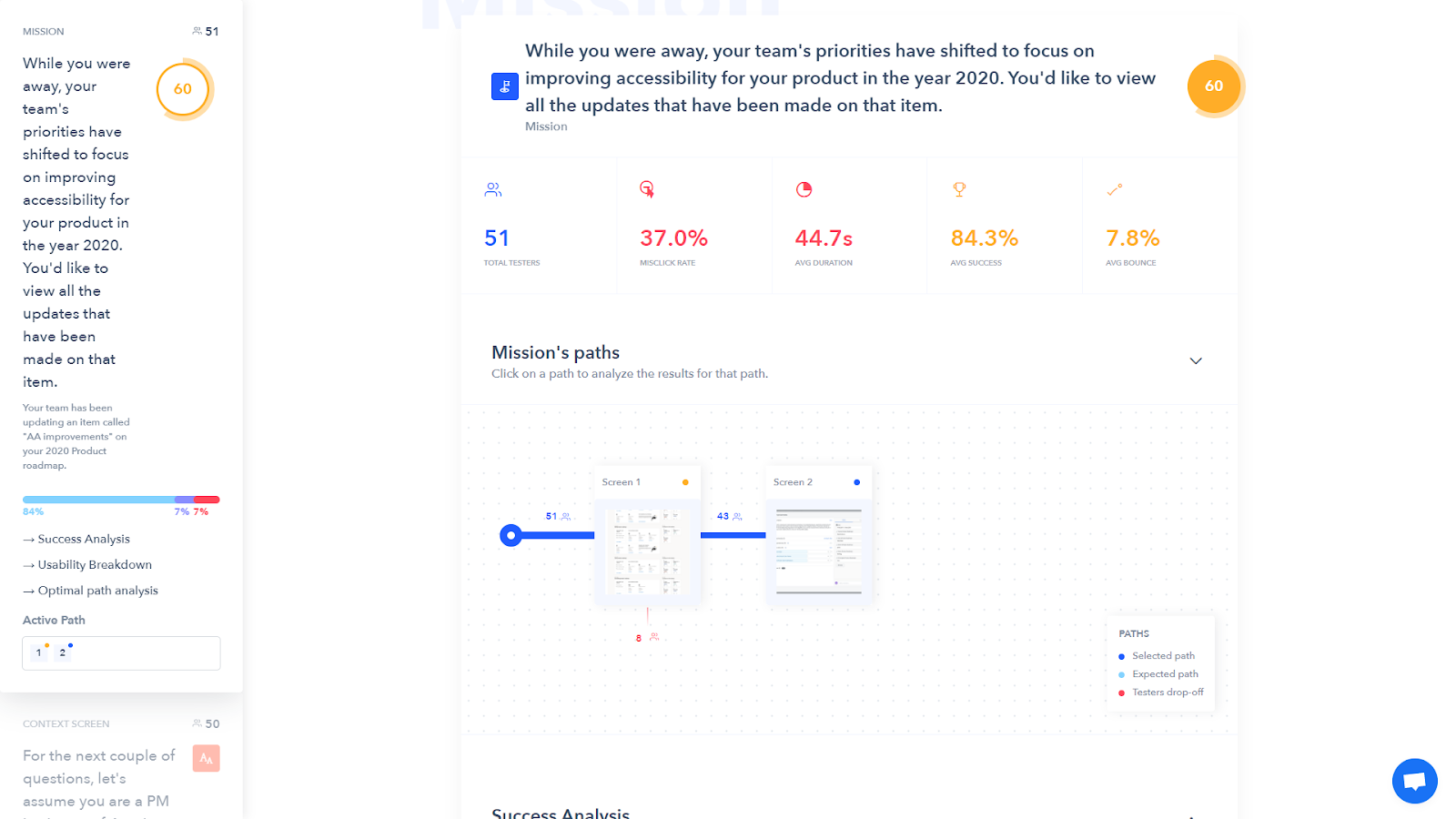 Only preset boards (RICE and Value vs Effort) had scores attached to them at the time of launch. Custom scoring was something we decided must be worked on post-launch after receiving feedback from a combination of different sources - Chameleon feedback forms, in-app user feedback, customer success calls, to arrive at the solution.

I worked with the product and engineering team to ship, test, and launch the custom scoring. After a rigorous problem definition and competitive analysis phase, I tested low-fidelity prototypes of the feature with 17 different users (mix of moderated and unmoderated tests) prior to marking the designs as ready for development. From project kick-off to implementation ready, this was achieved under 6 weeks.

From quantitative data we noticed a low usage and adoption rate for idea prioritization after the product area was launched. User research uncovered one of the reasons why there was low adoption rate - user data already lived elsewhere, and since manual entry was the only way to add the data into the system, the amount of effort required for migration wasn't worth the value added.

Reflection on the Project

Strong collaboration with product and engineering leads to focus and success

Despite the tight timeline, and morale challenges the project faced, a lot focus was put into relationship building with both product and engineering. The best way I've found to do this was to build trust through honesty and collaboration through aligning on the same goals - which is to deliver value to customers. I involved engineers and PMs whenever possible in usability testing calls to evoke that empathy for the user.

Build and ship in increments, embrace bias to action

Scope is negotiable but the minimum amount of value the product needs to deliver to satisfy customer needs are not. One of the biggest takeaways is to test early and often, and get feedback from both internal and external stakeholders.

Getting insights early while exploring different options allows one to derisk solutions. This allows teams, not just designers to be more confident and knowledgeable. Removing ambiguity is key to shipping quickly and successfully.

Include both business and behavioural metrics

A frustrated user might still pay for the app - it doesn't mean certain features have a good workflow. A feature that's well optimized for usability and frequently used may not generate the most revenue for sales. A mix of both metrics would be useful to get a better sense of what's working and what isn't.

In retrospect, there was a plethora of business oriented metrics across the app focused on measuring churn, but since churn and ARR retention is a lagging indicator it's hard to track performance and usability quantitatively and precisely this way.

Throughout the case study I've spoken at length about how valuable user research has been for increasing the level of confidence for product and design. However, overindexing on the feedback of a few users could lead one down the wrong path of solutioneering. A second opinion is vital when discussing findings to see where the true problems lie - important to ask if there is a problem at all.