Design and prototype of a $4 trebuchet kit for teaching physics in a 4th grade American classroom.

We created a papercraft trebuchet that can be easily assembled with household and classroom materials, and a data-visualization companion web app built using P5.JS that could track the kinetic and potential energy of the trebuchet real time.

The final cost of the trebuchet came out to be $11.23 for the whole build. However we learned from prototyping that this activity is best completed in a group. We found the ideal group size to be three 3-5th grade students, which would lower the cost to under $4 per student per kit.

As part of the kit, we also created a comprehensive instruction booklet for teachers. The booklet includes step-by-step instructions on how to assemble the trebuchet, has information on how to set-up the Arduino and accelerometer to connect to the trebuchet body. 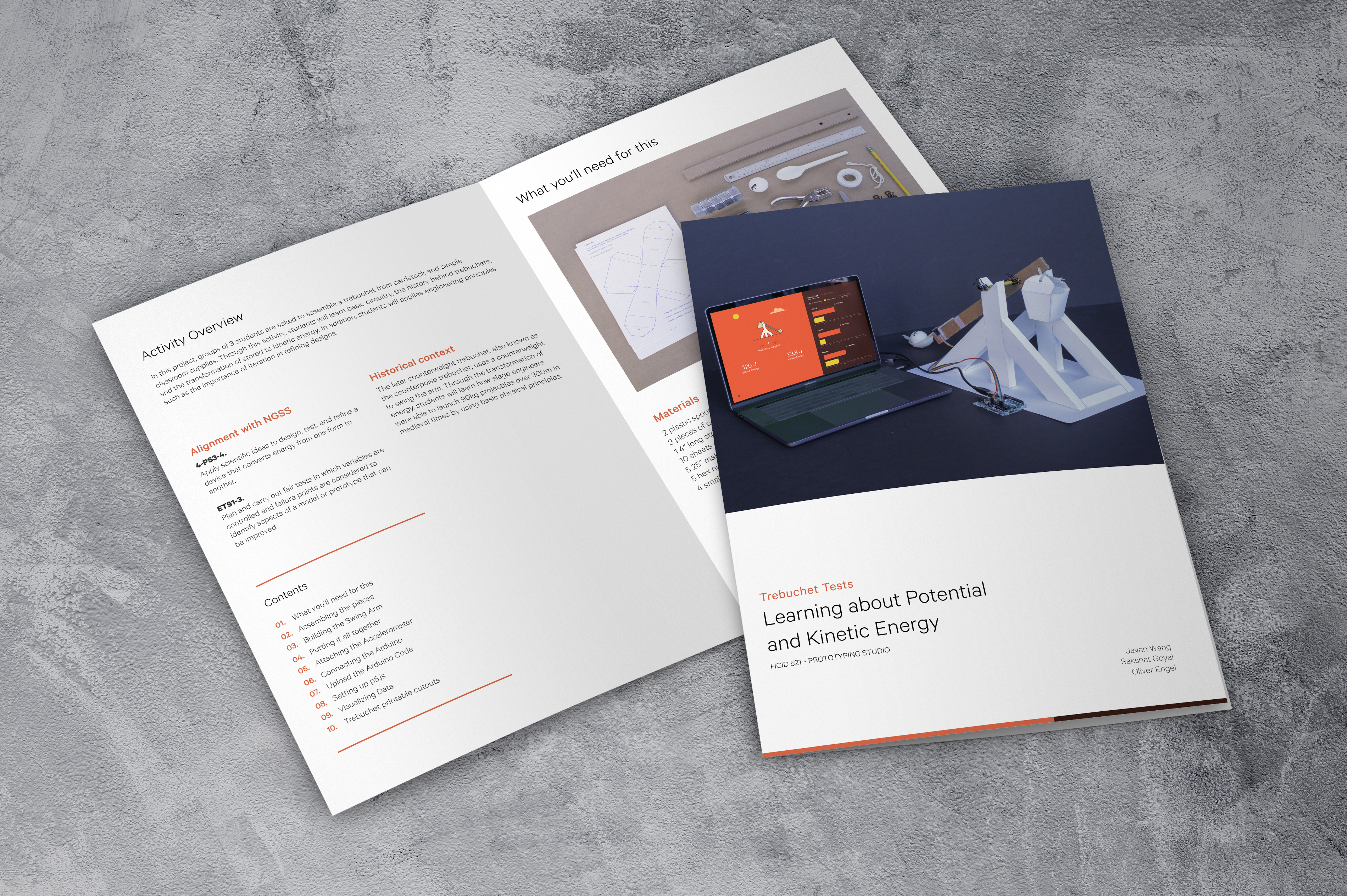 I took ownership over the product direction, in addition to management tasks such as scheduling, outreaching, stakeholder communication, and the creation of prototyping session guides. I also played an instrumental role in the content strategy for the instruction manual, and the narrative of the project.

Develop a hands-on lesson plan that aligns with the NGSS Science Standards for 3rd to 6th graders.

The kit also has the following constraints; it needs to contain suitable data visualization (software) and physical computing (hardware) components; the kit needs to be constructed from material that is readily available in a classroom; the kit should only make use of tools that can be found in the classroom; it should cost at most $10 USD per student.

The end product needs to embrace the three following values,

Cheap, affordable, and easily assembled in a classroom

Not an ephemeral experience - affords experimentation

We jumped into the design process by selecting a relevant NGSS standard and sketching a potential activity around the concept. From a list of 12 sketches, we landed on three finalists that had the greatest potential — Trebuchet, Hydroelectric Turbine, and DIY speaker.

Velocity was the name of the game. Immediately after ideation, we got hands on and constructed low-fidelity prototypes to get in front of students in order to validate the design concepts. We tested the prototypes with a group of 2-5th graders. The tactility was the focus for this round of prototyping. 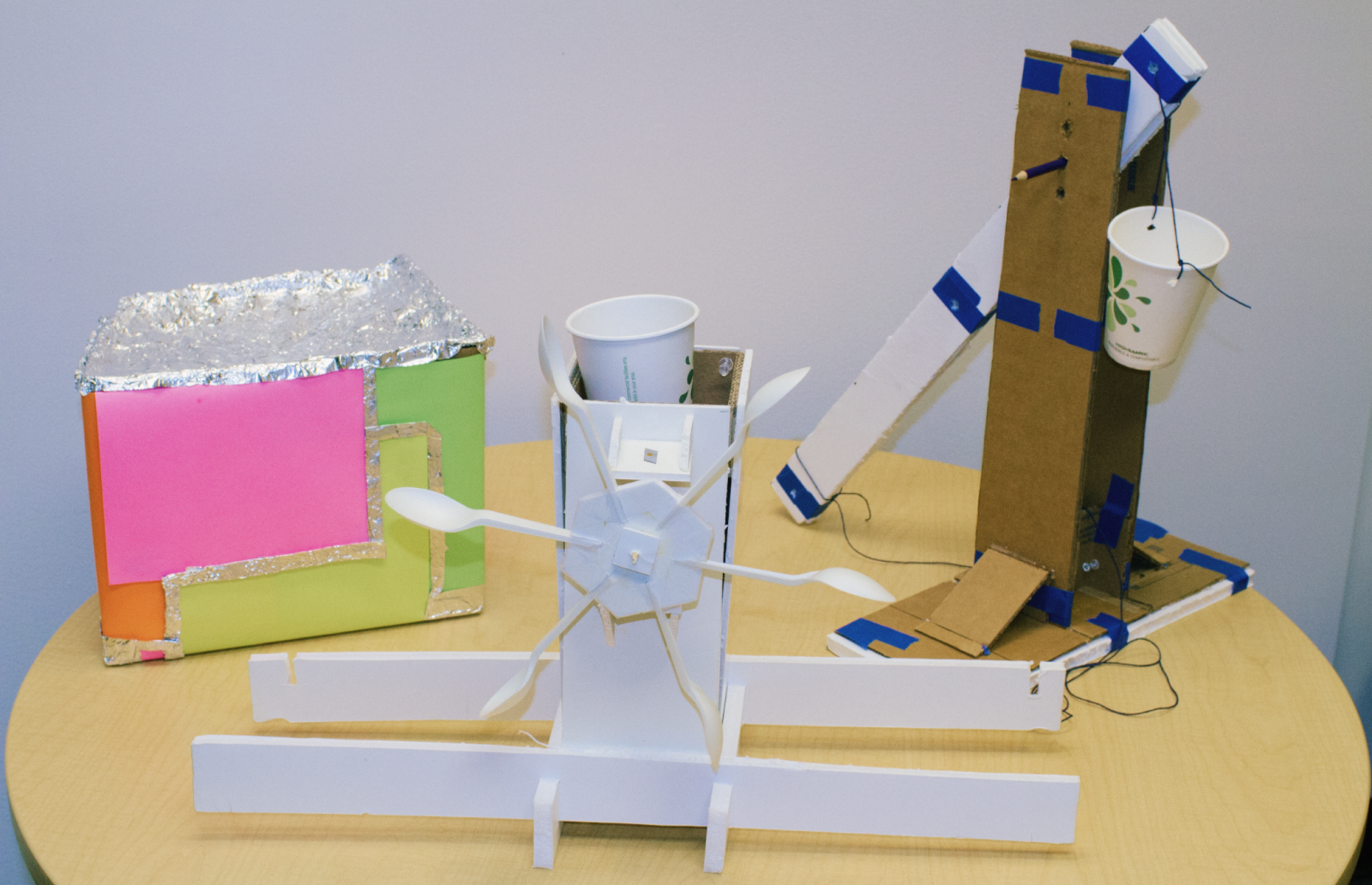 The prototypes that were tested with 2-5th graders 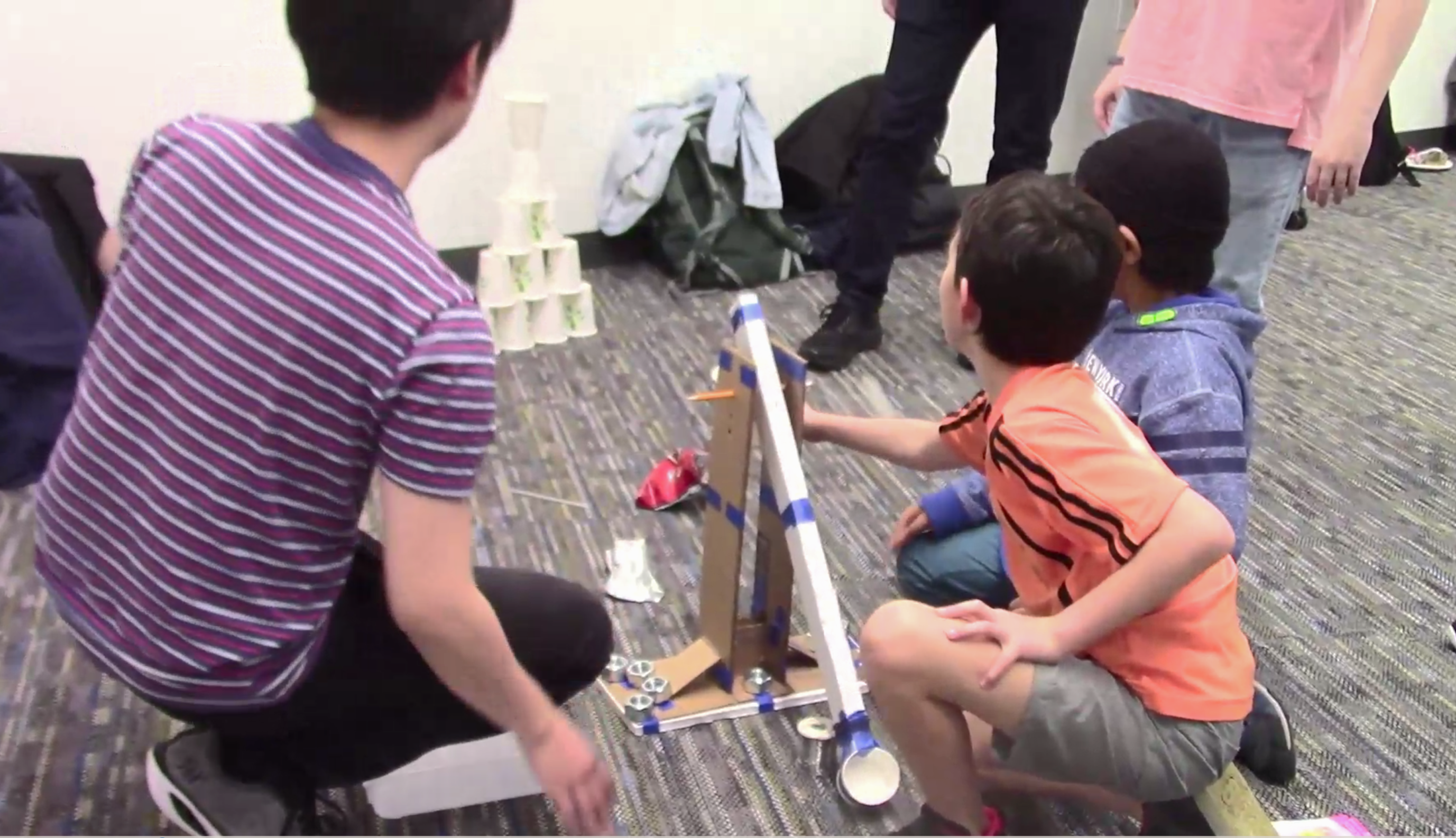 Students being engrossed with the trebuchet!

Simultaneously we produced a video prototype with a shifted focus. We wanted to elicit feedback on the educational component of the activity and lesson design.

Video prototypes of lesson plans by Oliver Engel and I.

We received mixed feedback from the different stakeholders. The students were most excited by the trebuchet and the DIY speaker due to the greater degree of iterability. Teachers responded most positively to the trebuchet due to how closely it aligned with the classroom curriculum. We followed up with the teachers by sending them a questionnaire for eliciting feedback, and one of our participants said: 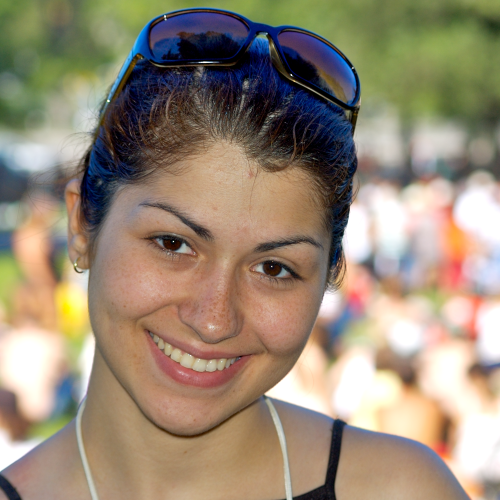 In fourth grade we do an energy unit and this could perfectly tie into the unit, and actually work better than some of our existing science experiments... I would totally purchase this kit for our energy unit next year if you created it.


However, our partner from Microsoft strongly advised us to pursue either the turbine or the speaker, because he feared that the trebuchet activity would descend into chaos and detract from the educational value. 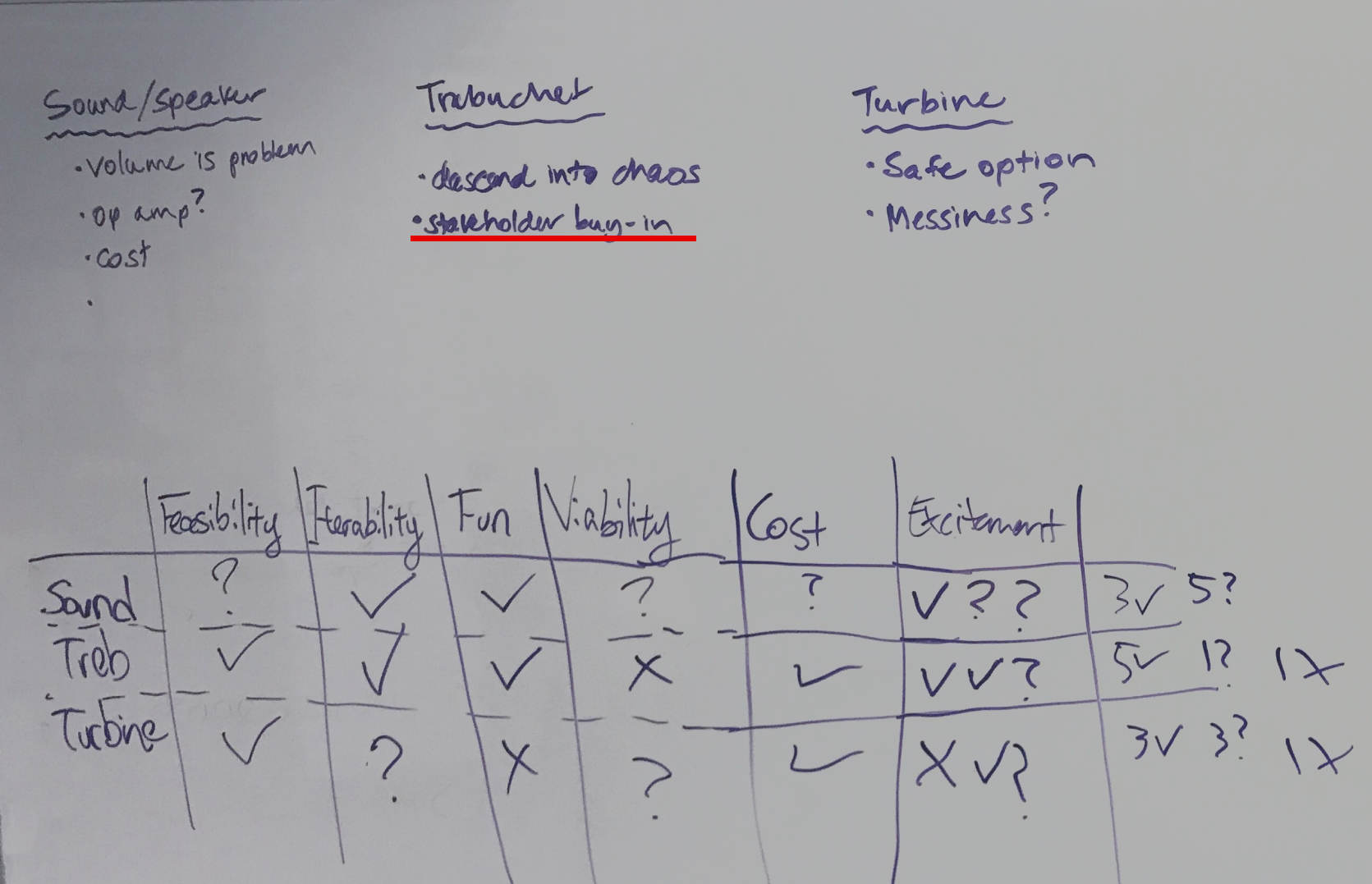 All three of us were excited about the trebuchet as a design concept despite the pushback, and the feedback we received from the other stakeholders gave us the conviction to push on with the trebuchet as our candidate. At this stage, our design challenge shifted to that of stakeholder buy-in by making sure that the trebuchet activity is manageable in a classroom environment.

We created a Wizard of Oz prototype that simulated the experience of the activity. In this iteration, a fake accelerometer was attached to the arm of the trebuchet to "measure" the speed of the projectile. The experiment allowed the participants to change the position of the fulcrum along the "arm" and "base" of the trebuchet. The trebuchet this time was created from lasercut plywood for additional stability, and the digital worksheet was created using Figma. We also provided a paper worksheet to help record the data across trials. 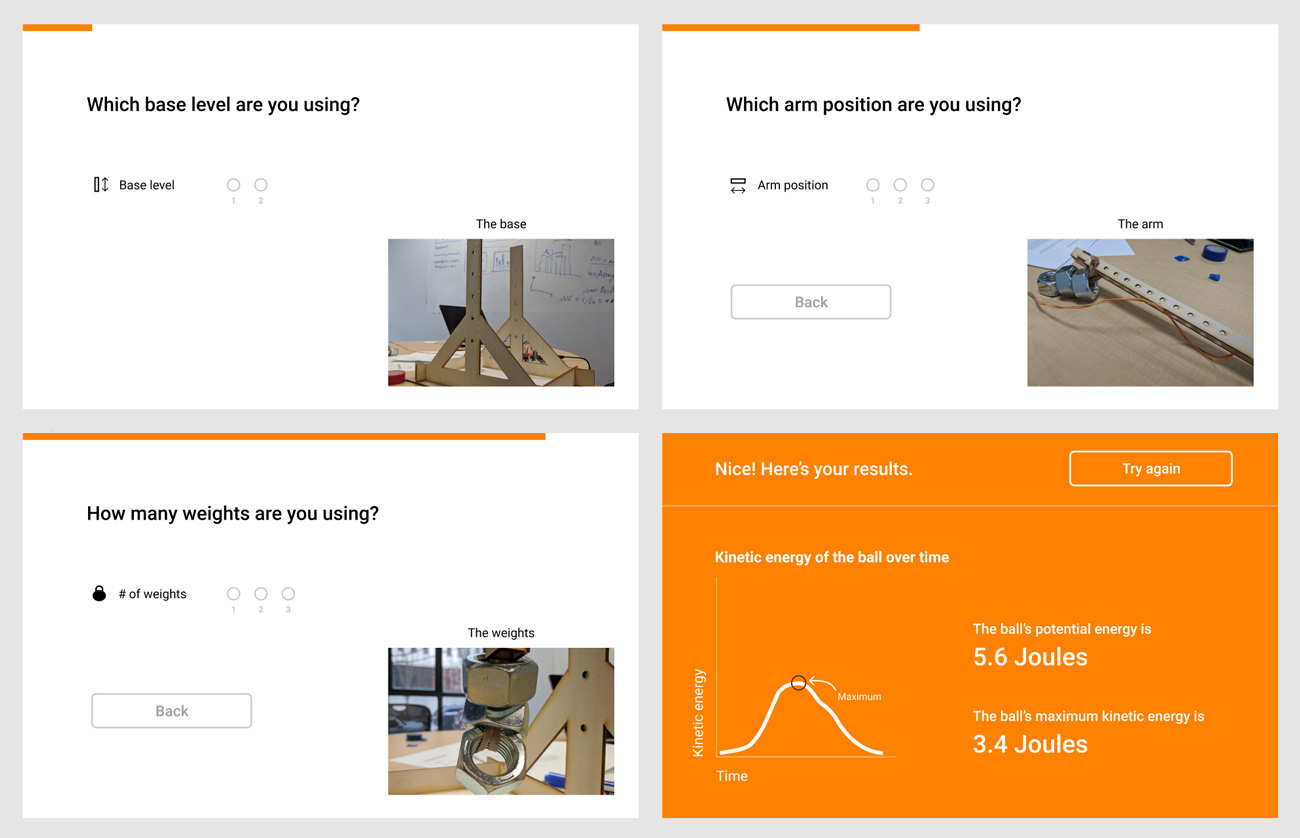 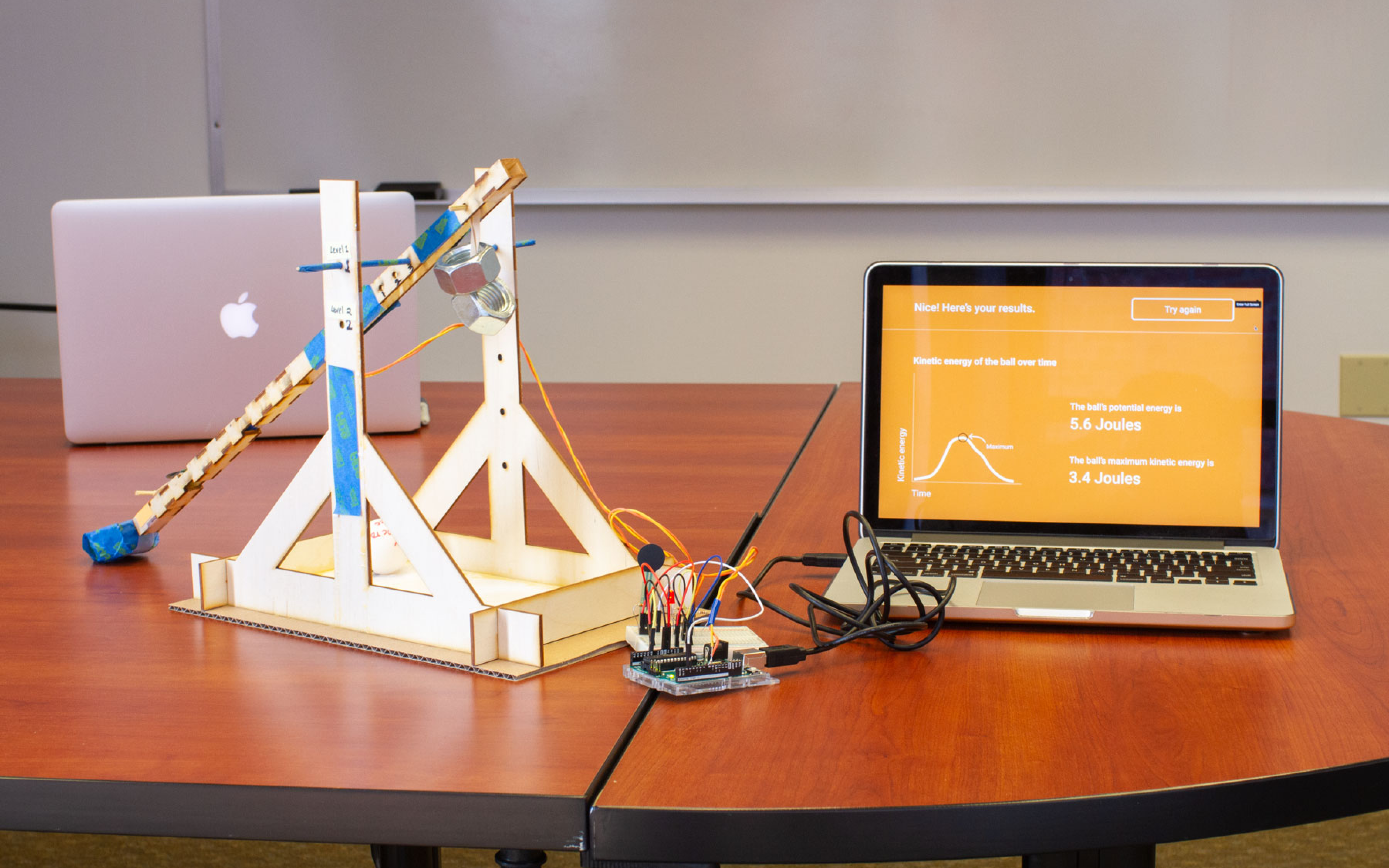 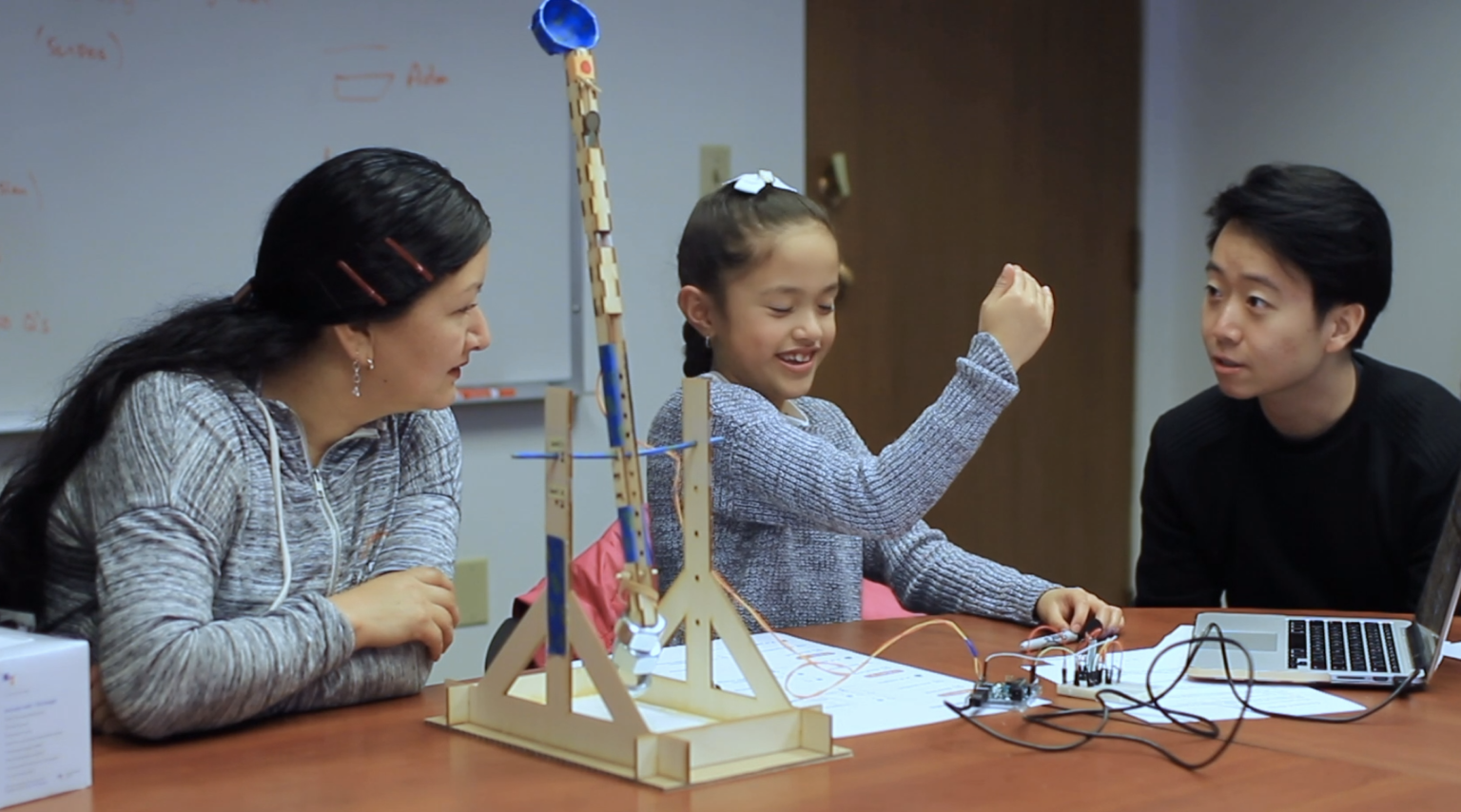 Our student participants loved it!

Our participants thoroughly enjoyed the activity, and the parents thought the experiment was both educational and fun.

For the next iteration of the prototype we would like to make the following changes,

Validation in a real classroom

We got the opportunity to test our prototype with eighteen 4th graders at Kokanee Elementary. We provided students with construction kits made from laser-cut cardboard pieces designed for assembly in groups of 3. We wanted to see if the activity would be engaging and educational, or descend into chaos. 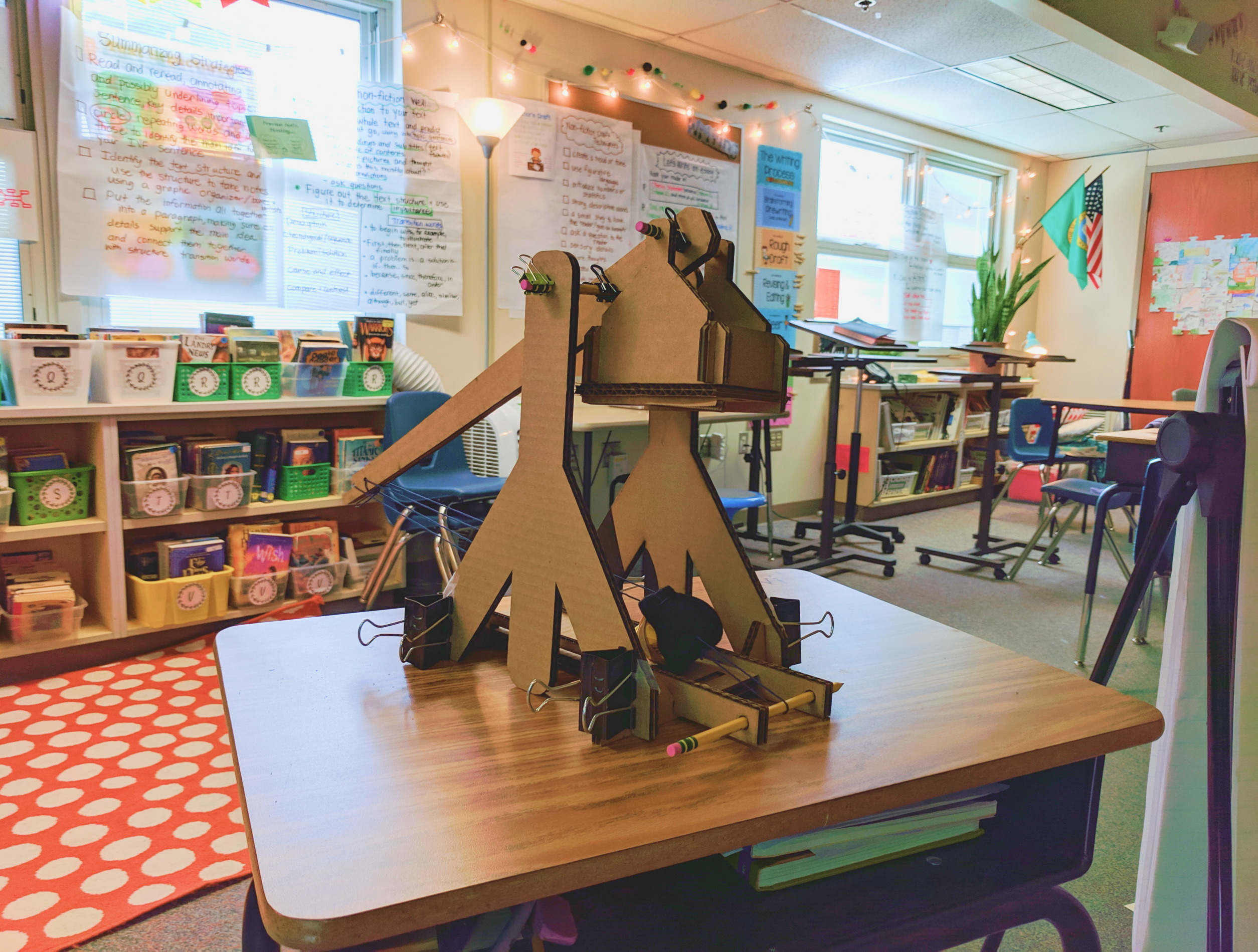 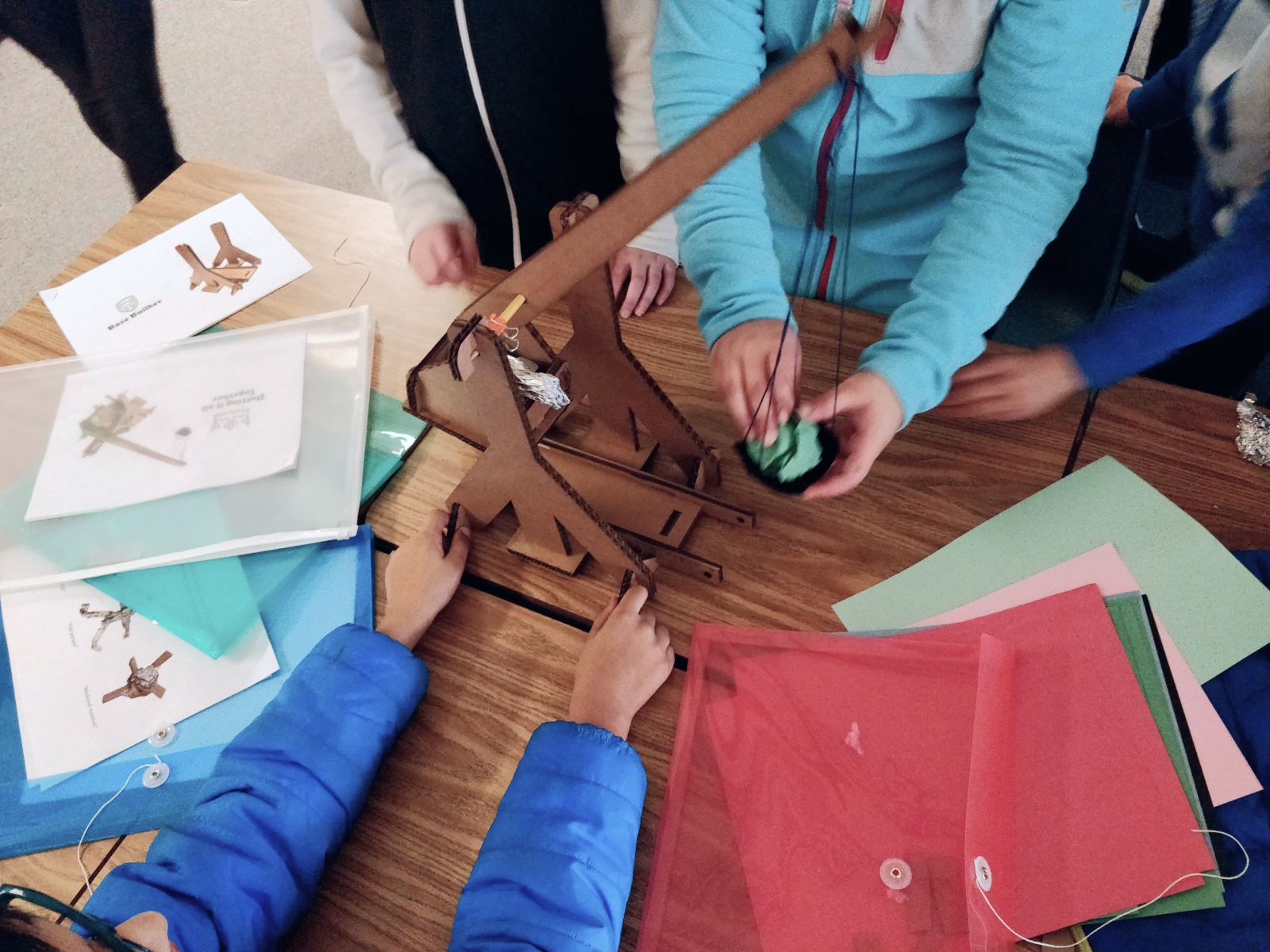 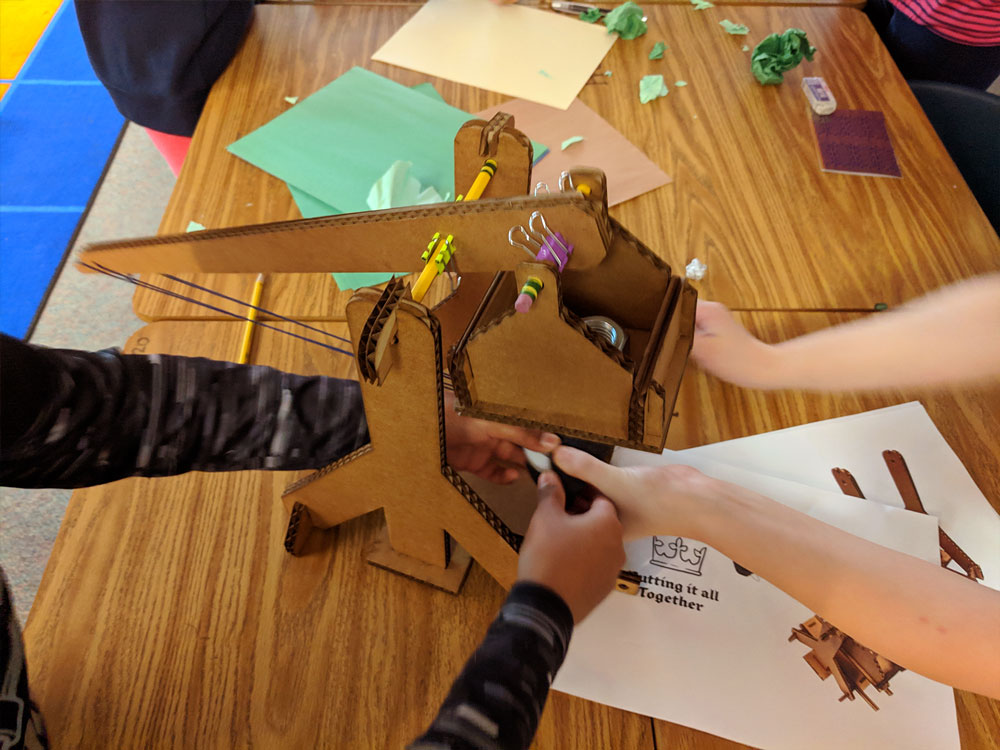 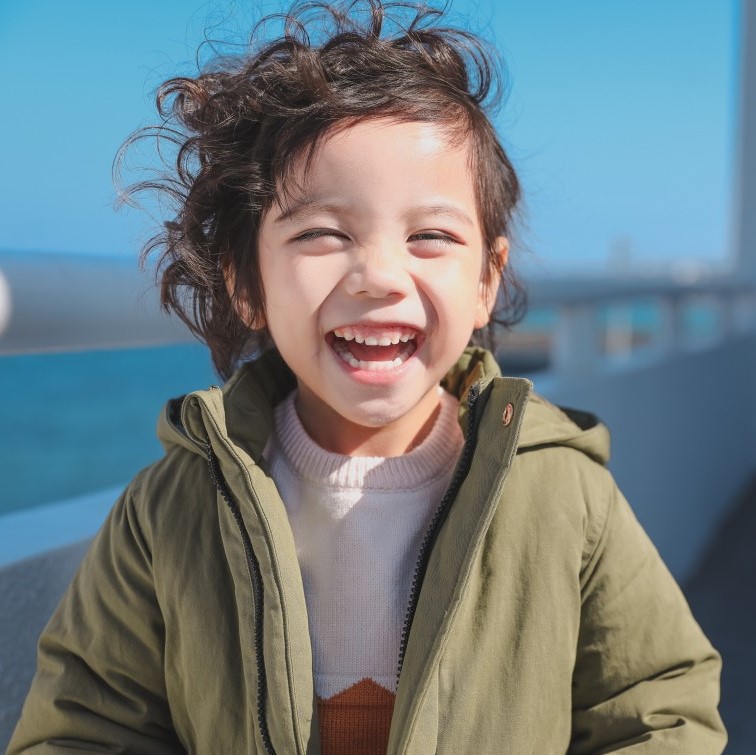 I would buy this for one trillion dollars!!


During the post-activity discussion, we conducted a quiz. The students demonstrated very clear understanding of the relationship between kinetic and stored energy. The overall experience was fantastic, and we received some very valuable insights.

Richard usually struggles a bit with school subjects and isn't as engaged as the other kids. But he loves building, and it was nice to see him really brighten up today..

What we demonstrated so far has been really educational, but the construction was from laser-cut cardboard, and the experience is not very iterative. 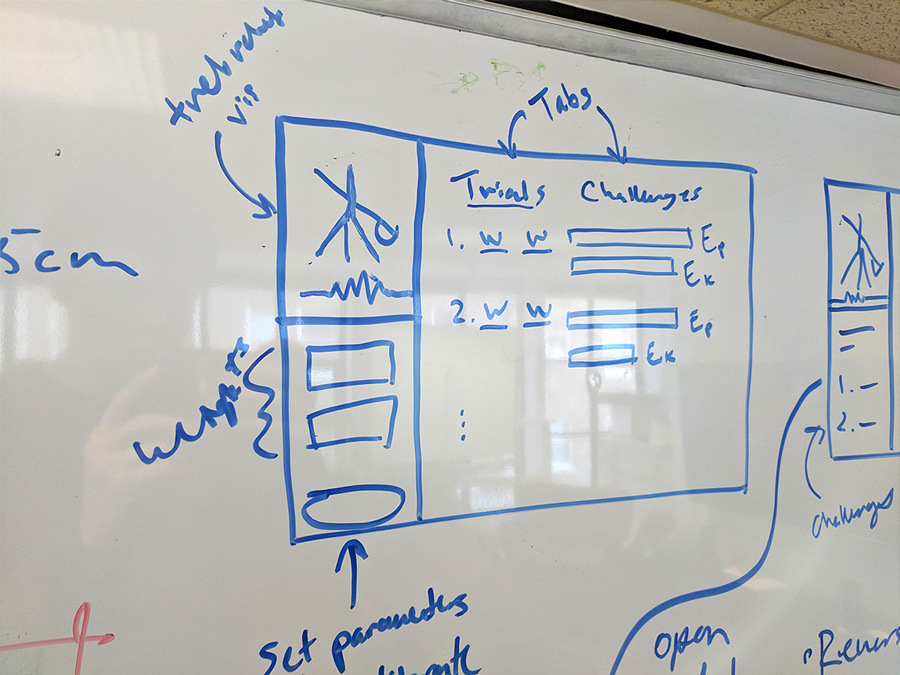 The construction so far used laser-cut cardboard as the material. This material would be optimal due to its weight, stability, and cost for a commercialized kit. However, the typical elementary school classroom would not have access to a laser-cutter. Inspired by origami, we opted for a papercraft trebuchet body instead, one that could be constructed using card stock.

We demonstrated the design proposal at the Microsoft Education showcase at the MS campus in Redmond. We received the Best Technical Implementation award for the demonstration of the trebuchet. 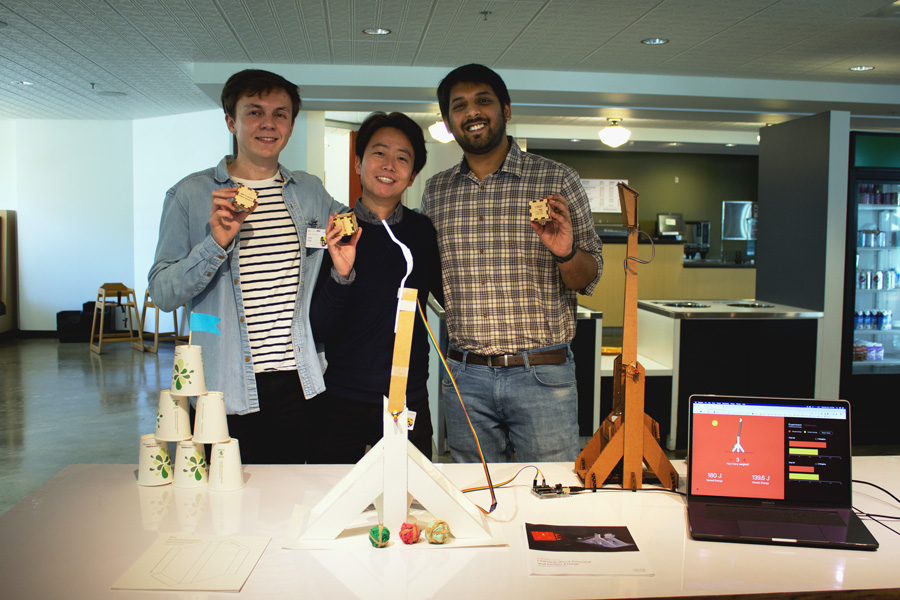 Oliver, Me, Sakshat at Redmond.

Next project: HoloLens in Filmmaking