Creating a design system for scaling design and development.

I collaborated with mobile engineers and led the initiative for the creation of a design system that would assist us with scaling the design as we moved Noom to be more B2B focused.

The frontend development and design team were required to build out responsive enrollment sites that are available for whitelabeling for healthcare provider clients.

Each client requested different features to be made available on these deployment sites. As a result of this, implementing each one of these customized sites required a significant amount of effort from the development team.

At the same time, the main mobile app for Noom Coach supported more than 15 different screen sizes. With the large variance in mobile screen sizes, it was quickly becoming tedious for us to specify those interactions manually every time a feature needed to be pushed out.

To address this problem, the proposed solution was to establish a shared style guide which documents the behaviour, state, and visuals of each UI element. Providing a coherent, and scalable style guide allowed us to maintain the visual language throughout the different workflows, while significantly reducing the development time required for each deployment.

We jumped into research by understanding how similar organizations have tried to tackle similar problems. One of the things I found were that similar companies have been addressing the issue of remaking design components and aspects of design systems.

A number of articles on Medium pointed to the atomic design system, something Brad Frost talks about in his book.

Having a grid system allows us to specifically define how screens look across different device sizes. There's no point reinventing the wheel, I just borrowed bootstrap's grid system and adapted it to our margin values. 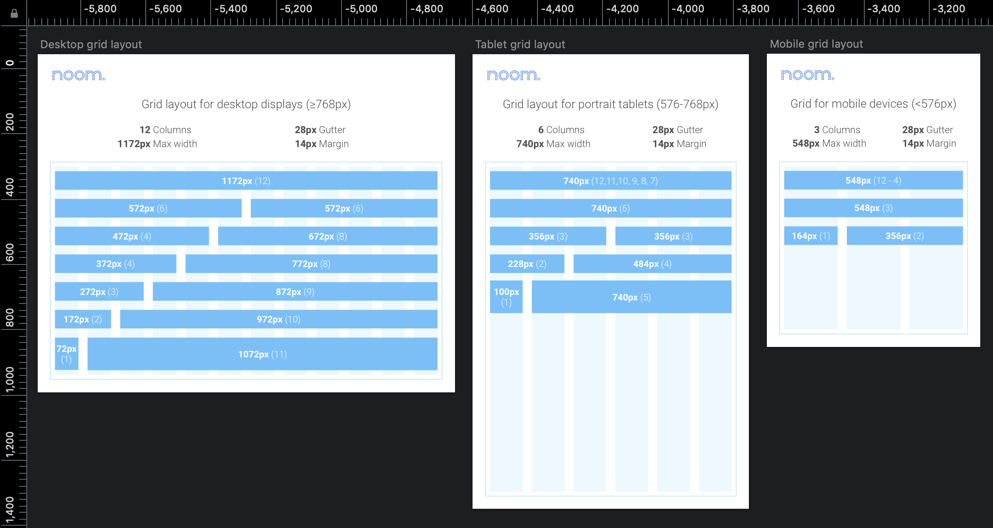 How the grid looks across multiple screen sizes

How the different input selectors would look given the conditions allows us to dictate the system. 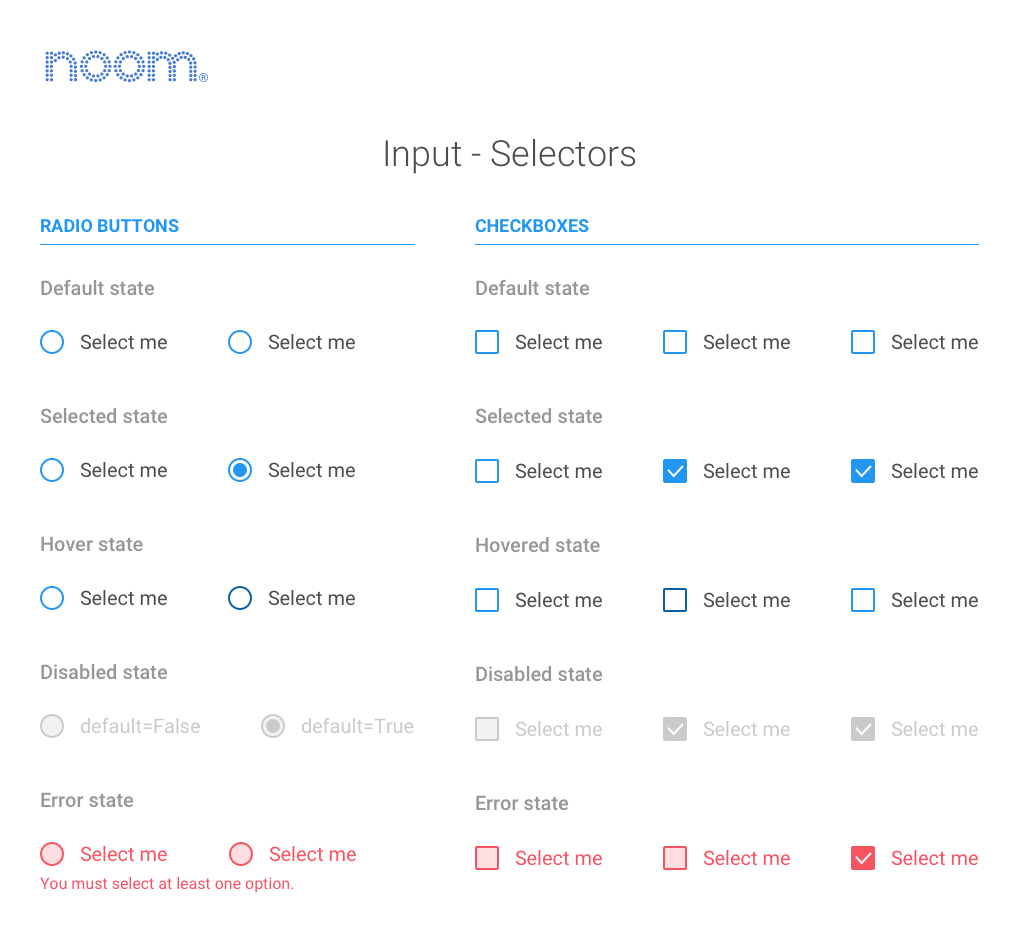 How it's all applied

A number of redlined examples are included in the style guide to show how it's actually applied given the overarching information architecture. We don't actually redline designs for actual design to development hand-off, since Zeplin does it 100 times more efficiently.

Redlines applied to a health article page for demonstration

A lot of these components were common elements that have been used in different parts of the app and web flow previously. But since the projects were handled by different designers across multiple sprints, there were a lot of discrepancies between the behaviour and appearance of these components.

The biggest challenge I faced while designing the style guide was trying to keep the visuals in accordance with the brand, while consolidating all the different behaviours and states.

A lot of the work that went into this was me Slacking people asking, "Hey X interaction does the same thing as Y interaction - what's the rationale for having two separate patterns?"

During our weekly design reviews I would report on the progress - engineers and designers would then pitch in to see whether the interactions I've documented or consolidated actually makes sense for the function they were prescribed to do. PMs would occasional pitch in to make sure the interactions we are designing are applicable for the whitelabelled version of the app.

The design system style guide was distributed in two ways - we had a printable version pinned up with all our interaction flows. Each of the specific components and interactions were created as ready-to-use (and interactive) modules using React and placed in our internal development wiki at Noom. 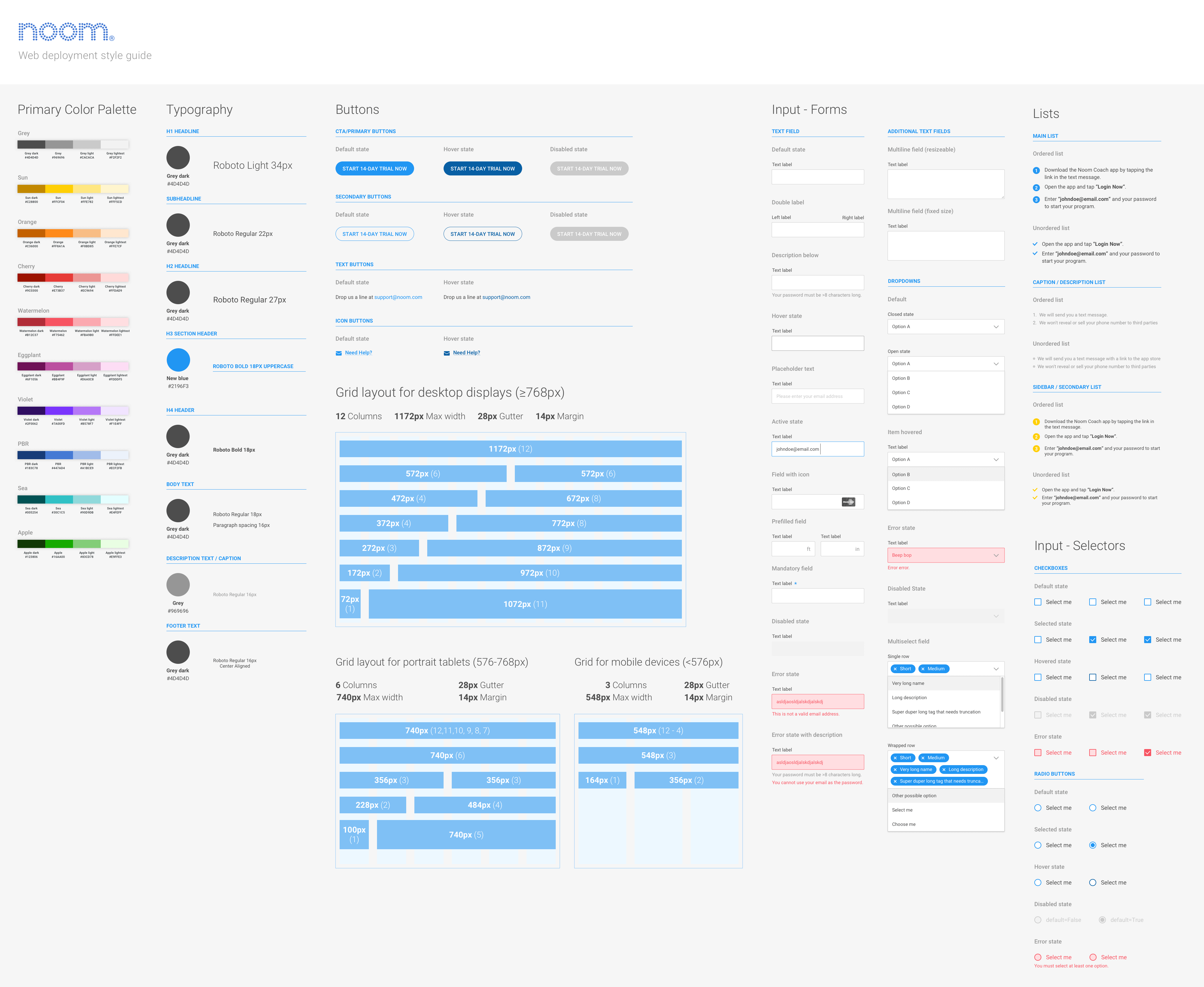 Designing from a system will save design and development efforts

Designing from a system leads to a better end user experience

Over the years, the main app had been worked on by half a dozen designers. One of the things we noted were the discrepancies within the app, and how inconsistent some design patterns were. Taking the time to establish the design system allowed me to compare the documented interactions against the interactions on the live app, allowing teams to make the correct iterations quickly.